The  is linked to the name of Professor George Oprescu (1881-1969), art critic and historian, a keen art collector and scholar who enjoyed wide recognition between the wars. He was not only the first director of the institution, but also its founder. After the war, the pragmatically minded Oprescu was wary enough to avoid antagonizing the new, Communist authorities. As the director of the institute, he was thus able to build an institutional milieu which was suitable to the development of research into the history of art, a mission for which he was more than recommended by his previous academic and cultural involvements. It is worth noting that he took advantage of his position and employed people who had been marginalized or sentenced to prison by the authorities: Ion Frunzetti, Alexandru Paleologu, Remus Niculescu, Emil Lăzărescu, P.H. Stahl, Pavel Chihaia and others.

George Oprescu had a calling for scholarship and organisation. His experience and an unfailing intuition of value made him a born teacher. With his eye for vocation and talent, he fostered genuine academic research within the institute and encouraged archival and field work. He strove to enrich the reference library of the institute and to strengthen its profile. He took over from the Academy a sizeable collection of books, which constituted the core of the library. He founded the journals Studii şi Cercetări de Istoria Artei and Revue Roumaine d'Histoire de l'Art ; the latter constitutes the researchers' contribution to international scholarship in the history of art. These are just a few of Oprescu's achievements during his two decades as director of the Institute, which would prove decisive for its future development.

The outline of a life

George Oprescu was born on 27 November 1881 in Câmpulung Muscel. A childhood afflicted by poverty and the mother's untimely death would not seem the starting point for a successful career. However, George Oprescu was fortunate in having the emotional and material support of generous people. He attended high school in , lodging with the family of his friend Constantin Ionescu-Mihăeşti. Surrounded by fine art, paintings, books, and precious furniture, he developed a keen artistic flair, which he later honed to perfection in the company of Dr. Ioan Cantacuzino, a celebrated scientist and a dedicated collector of engravings. 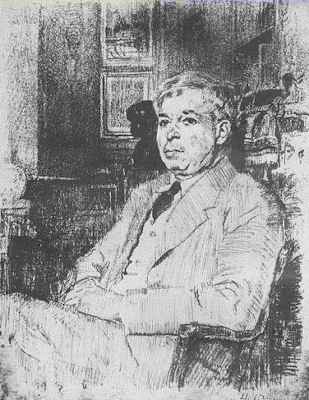 In 1905 he graduated in Letters and Philosophy and went on to teach French in and Turnu Severin; then he worked as reader at the . During a specialization in he met and befriended Henri Focillon, to whom he later dedicated Un grand historien de l'art, ami des Roumains: Henri Focillon. Their correspondence is a significant part of the corpus of letters exchanged by Romanian cultural personalities and their foreign counterparts (see, for instance, Lettres de Henri Focillon à Georges Opresco, préface, texte établi et notes par Radu Ionesco, in Revue Roumaine d'Histoire de l'Art. Série Beaux-Arts, 1994).

In the 30s and the 40s George Oprescu worked for various bodies of the League of Nations, as secretary of the Paris-based Committee on Intellectual Cooperation (1923-1930), then as secretary of the Committee on Arts and Letters in , up to 1939, when he returned to for good. In 1931 Nicolae Iorga offered him a professorship in art history at the . From 1932 to 1942 he managed the , to which he donated many of the works of art he had acquired either in or abroad; the museum's collections are now hosted by MNAR. He was director of the from 1949 to the end of his life; he died in August 1969, a few months before his 88th birthday.

In 1962, George Oprescu made a valuable donation of 1400 drawings and 6000 engravings to the Print Cabinet of the . His house on in Cotroceni, hosting his private collection, was a museum until 1977, when the paintings, drawings, decorative and folk art collections were transferred to the , and the books went to the .

In the early 20s, when he devoted himself to the history of art, George Oprescu was a fully mature man; however, this late bloomers outstanding vitality and longevity more than compensated for the relative delay. The professor left an impressive legacy of scholarship. He favoured the notion of an active culture, which animated the intellectual community between the wars. He aimed to systematise and enrich the history of art, and to promote Romanian art in Europe; he published in , , , , , and many of the books he published in are available in foreign languages. His first object of inquiry was peasant art and the work of prodigious painters such as Petraşcu and Andreescu; in 1937 he published Pictura românească în secolul al XIX-lea, the first comprehensive volume on Romanian 19th C painting, which was awarded the prize of the . He went on to write on topics ranging from Romanian mediaeval architecture to modern drawing, painting, and sculpture, with occasional forays in the history of European art.

The professor bequeathed to the Institute the house he owned in Câmpulung Muscel, a charming building that showcases the structural and decorative features of the vernacular architecture of the region. The house is now used by the Institute staff as a working and holiday retreat.