The Institute of Art History and other research institutes were established by a decree of the Council of Ministers whereby the Romanian Academy was subordinated to the state (decree published in the official gazette, Monitorul Oficial, issue 132 bis of 9 June 1948).  A reformed and cleansed Academy was put in charge of the newly-established institutes. This Soviet-inspired system bespoke the imposition of post-war Romanian government. Nonetheless, the Academy institutes continued to hire top researchers, some of whom were politically undesirable, and enjoyed some degree of autonomy in the 60s and early 70s, during a relative loosening of ideological constraints.

Legally established in 1948, the was founded de facto in 1949; it was headed by Professor George Oprescu, who held the office of director for twenty years. His directorship saw the development of fundamental research in the field and the publication of major surveys of Romanian art history. By setting up distinct, specialist departments, George Oprescu promoted a multidisciplinary approach to medieval art, Byzantine art, the history of theatre, film, music, and architecture. The library and the reviews of the institute were founded in the 50s and the 60s.

The Academy institutes were reorganised in 1975. The of was jointly subordinated to the of and Political Science and to the Ministry of Education, via the  "Nicolae Grigorescu" . Political imposition and censorship became more and more apparent. However, the institute succeeded in preserving some degree of intellectual freedom, which was made manifest in the conferences of the 80s, when debates on aesthetics and the philosophy of art obviously diverged from the cultural discourse of the establishment.

In 1990, a government decision (decree 4/1990 on the organisation of the ) brought the Institute back within the Academy, and in 1992 it was given the name of its founder, George Oprescu.

After Professor Oprescu's directorship, the position was held by high-profile researchers such as Mircea Popescu, Ion Frunzetti, Răzvan Theodorescu, Vasile Drăguţ, Elena Zottoviceanu, Theodor Enescu, Manuela Cernat, succeeded after 1990 by Magda Cârneci, Andrei Pleşu, Ioana Vlasiu, and Remus Niculescu. Professor Silviu Angelescu of the University of Bucharest Faculty of Letters was in charge of the Institute from 1999 till March 2011. In April 2011, dr. Marina Sabados was temporary assigned director of G. Oprescu Institute. From 1 May 2011, the institute is run by dr. Adrian-Silvan Ionescu, senior researcher I. Art critic and historian Gheorghe Vida was  deputy director from 1995 till his retirement, at the beginning of 2011. He was followed by Marina Sabados (May 2011 - December 2013), prof. Alin Ciupală (December 2013 - December 2017), and dr. Constantin Ciobanu.

The of was housed at first in the former royal palace turned Art Museum of the , then in a building next to the C.E.C. palace. In 1967 the Institute moved to its current premises at 196 Calea Victoriei, in the Dissescu Mansion, on the corner of . 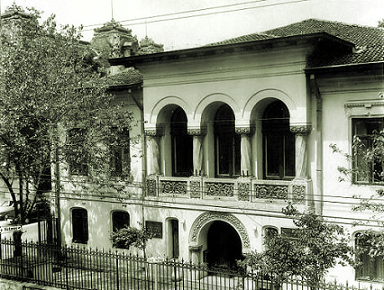 Built in the 1860s, the mansion was acquired decades later by Constantin Dissescu (1854-1932), a distinguished politician and professor of law. The new owner commissioned architects Grigore Cerchez and A. Clavel to renovate the building. The design proposed by the two showcases the neo-Romanian style, an architectural favourite at the turn of the century. When work was completed, Calea Victoriei  - the core of culture and high-life - could boast yet another architectural gem.

After Constantin Dissescu's death, his residence housed the Institute of Italian Culture (1933-1949), followed by the Romanian-Russian Institute, the dorms of the Polytechnic Institute, the Reed Directorate of the Ministry of Chemical Industry. Having been put to so many different uses, the building had its interior architecture altered. The house was renovated in the early 2000s. 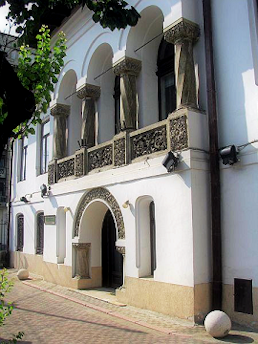 Listed as a historical monument, the Dissescu Mansion stands out through its elegant lines, harmonious proportions and Brancoveanu-style decoration. Its distinctive character is given by the loggias of the two façades, with their columns and railing of intricately carved stone. The interior decoration still retains some of the outlay designed by Grigore Cerchez. The mansion houses the institute's collections: the art library (the only one of its kind in ), the archives, a valuable art collection from donations made by Professor Oprescu, engineer Gheorghe Balş and the Busuioceanu family.